A draft master plan that will guide the development of Letterkenny for years to come was released today by Donegal County Council.

A public consultation will now take place on the draft Letterkenny 2040 master plan, with council saying the project aims to imagine the future of the city center to 2040 and beyond.

Donegal County Council says the plan will shape a compelling vision for Letterkenny’s future as a regional center in the northwest, attracting investment and identifying a series of projects to bring about powerful social, economic and environmental transformation.

Opening the consultation process, Letterkenny and Milford MD Cathaoirleach Cllr Jimmy Kavanagh said it sees the regeneration of Letterkenny town center, with a number of creative and exciting ideas to make it an attractive and vibrant place and position the city ​​for future investments while responding to considerable challenges such as the climate crisis.

He urges the entire community to engage in the consultation process over the next 4 weeks. 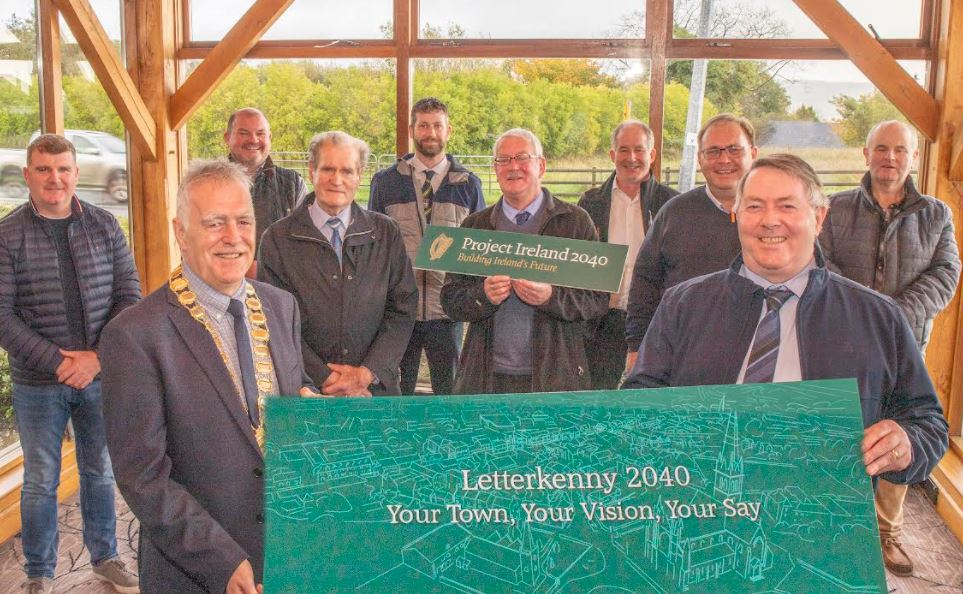 The designers say the plan centers around 4 main concepts related to Main Street, Pearse and Port Roads, green and blue infrastructure, as well as a town square and transport hub.

It is based on a previous consultation, with planners and council saying the project is heavily based on what the people have told them.

Donegal County Council is pleased to initiate a public consultation process on the draft Letterkenny 2040 Master Plan. Letterkenny 2040 is a process to prepare a regeneration strategy for Letterkenny Town Center to identify ambitious priorities to make it an attractive, accessible and prosperous place. It is a project to imagine the future of the city center by 2040 and beyond and the public is invited to express themselves.

This exciting project is funded by the Urban Regeneration and Development Fund (URDF), a flagship initiative of Project Ireland 2040 and funded by Donegal County Council. The strategy shapes a compelling vision for Letterkenny’s future as a regional center in the northwest, attracting investment and identifying a series of projects to bring about powerful social, economic and environmental transformation.

Opening the consultation process, Cllr Jimmy Kavanagh, Cathaoirleach of Letterkenny and Milford Municipal District said: “I am delighted to see this strong regeneration focus on Letterkenny town center and to present the draft master plan to the public for welcome feedback on projects and ideas. that have been included. The draft master plan contains many creative and exciting ideas to make Letterkenny city center an attractive and vibrant place, positioning us for future investments while responding to considerable challenges such as the climate crisis ”. He added: “I would encourage the whole community to engage in this consultation process over the next 4 weeks.”

The draft master plan was prepared by an award-winning team of consultants led by urban design and regeneration consultants The Paul Hogarth Company and also including Hall Black Douglas Architects, WS Atkins Transport Consultants, AV Brown and Queens University Belfast. The draft master plan is built on what people said during the first consultation phase in February 2021.

The team leader and director of The Paul Hogarth Company, James Hennessey, said: “The draft master plan focuses on 4 main concepts relating to Main Street, Pearse and Port Roads, green and blue infrastructure, a public square and a transportation hub. Listening to the people of Letterkenny during the first consultation phase and through our study of the city, we see a huge opportunity to unlock the potential of the city center. The draft master plan shows how this can happen by creating and connecting more green spaces, restoring buildings, prioritizing and enabling walking and cycling, repopulating the city center as a great place for homes and, therefore, by making Letterkenny a destination of choice ”.

Liam Ward, Director of Community Development and Planning Services, added: “The publication of the draft master plan is a key step in bringing all of the downtown regeneration priorities together into one clear, visionary and exciting strategy. It is part of a larger program of regeneration initiatives which are also activated by the Urban Regeneration and Development Fund and which are progressing in parallel. These include the design and development of infrastructure for walking and cycling, the strategic acquisition of land for regeneration purposes, and capital investment in the development of the Cathedral Quarter and the old courthouse. All in all, there is a clear momentum and many ambitious and revolutionary opportunities for the future of Letterkenny as our strong regional center in the North West City region ”.

Sinead McCauley, Executive Planner of Donegal County Council’s Regeneration and Development Team, said: “The community of Letterkenny has already played a key role in the emergence of the draft master plan, but it is still a work in progress. The continued participation of the local population will be critical to the success of Letterkenny 2040 and therefore we would like to hear from as many people as possible about the draft master plan. As a result of the draft master plan, the project will develop more detailed design ideas for key reclamation sites and for further consultation in the New Year.

There are many ways to get involved during Thursday 11e November to Thursday 9e december 2021:

A consultation event is also planned for schools on Friday 26e November in the old A-Wear store. The team would love to hear from the youth, so if your school is interested in participating, please contact us at [email protected]